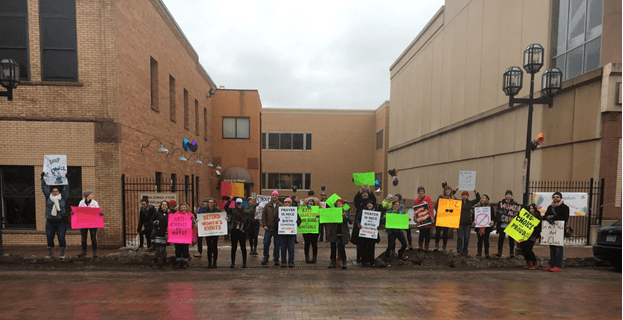 The only abortion clinic in Northern Minnesota, WE Health Clinic, is situated in downtown Duluth. The unassuming stone building is distinguished only by the large words on the front: “Building for Women.”

WE Health Clinic has provided reproductive health care since 1981, co-founded by Tina Welsh and Dr. Jane Hodgson. Jane was one of the first and only doctors in the country to be convicted for providing an abortion in a hospital in 1970. Tina has been a leader in Duluth feminism for decades and still fights for gender equity in the Twin Ports today.  Together, Jane and Tina decided to open the Building for Women in 1993, with WE Health Clinic as one of the tenants.

It’s here, outside this historic building rich with feminist activism, that “40 Days for Life” gathers every fall to host a 24/7 vigil to oppose abortion. And where, for the past three years, I have helped organize counter protests to affirm peoples’ right to safe and legal abortion.

I remember going to my first Party on the Plaza—the kickoff to our counter protest “40 Days of Choice.”  I remember the music, signage, and smiling faces; the pure joy and celebration at that event gives me feel-good chills to this day.  Every year this series of events happens over my birthday, around Halloween.  That first year, I hosted my celebration at the plaza. Instead of gifts, people volunteered and donated to the clinic.

Finding that community felt like finding a political home. We were and are a family of folks showing up with love, care, and joy for abortion access.

I have continued to participate each year with the H.o.t.d.i.s.h. Militia, Feminist Action Collective, and Feminist Justice League, who have all been organizing locally around this issue for years. This year we are co-hosting some days of action with TakeAction Minnesota. Volunteers stand outside the Building for Women and WE Health Clinic as a symbol of love and support—so people trying to access the care they need don’t have to face anti-abortion protesters alone.

Nobody should be shamed for getting an abortion or receiving reproductive health care. Period.

I had an abortion when I was 19. I was taught by dominant culture that I was supposed to feel shame. That simply not wanting to be a parent wasn’t a good enough reason to have an abortion. Even the people who supported me warned that it was normal to feel grief and regret. I braced myself—but those feelings never came.

After I got my abortion, I felt relief. I felt good.
I always felt it was the right choice, still to this day.

I am involved in reproductive health, rights, and justice in Duluth because I want people to feel like they can say: this is the right decision for me, and I don’t need to give you a reason why.

If we are going to build a movement for justice and liberation, people need the freedom to be who they are and live the lives they want to live. A core part of that is being able to feel at home in our bodies, gender, and sexuality.

Reproductive justice is about abortion access, but it’s about more than that. It’s about bodily autonomy, and being able to make decisions about our bodies, health and futures. As a parent, it’s about making sure my son can grow up in a safe, supportive environment. It’s about creating a world where he knows that his gender and sexuality can change, and that he is loved, cared for, and supported in whatever he chooses to be and do in the world.

When I stand outside the Building for Women, that’s what I am standing for—a better future for him, for myself, and for all of us.