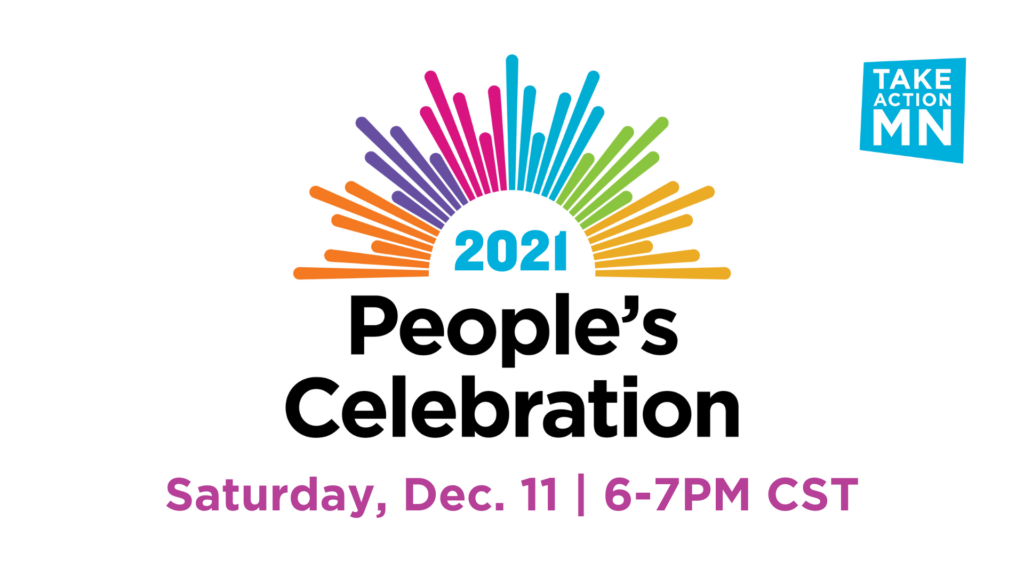 On Saturday, December 11, TakeAction Minnesota hosted the 2021 People’s Celebration, our annual gathering of progressive champions, activists, and community leaders from across Minnesota. We celebrated our 15th birthday in style, with dozens of VIPs, hot-ticket musical performances, and powerful remarks from our honorees. Thank you to everyone who attended and our members who power this work.

Fifteen years ago, leaders from across Minnesota came together to ask: how can we make more politically possible? This year, we’re honored and grateful to be celebrating the progress we’ve made together.

Local singer-songwriter Jeremy Messersmith sang Happy Birthday to us, and Nur-D rocked the balloon palace with a rousing three-song set alongside DJ Hayes.

And, we shared our gratitude to the movement leaders and organizations, including Black Visions, Reclaim the Block, Faith in Minnesota, SEIU Local 26 and the Minnesota Youth Collective who made up the Black-led, multiracial Yes 4 Minneapolis coalition. Together, we collected 22,000 signatures to put City Question 2 on the ballot, and over 66,000 residents voted YES to transform & expand public safety.

TakeAction leaders, members and supporters made the night unforgettable – showing off their #PeoplesParty21 ‘fits on social media, hosting watch parties at home, and celebrating with us in real-time in the virtual event chat.

(Checkout the goodie boxes from Minnesota Black Box, a collective centered on Black economics whose mission is to support Minnesota Black-owned businesses through a monthly subscription box. Thomasina’s Cashew Brittle was a major hit. TakeAction Bingo made the event interactive, and the kiddos loved getting creative with an adorable art kit from Paintings with Mo.)

Together, we raised a total of $92,789 to fuel grassroots organizing. We’re so grateful to all who celebrated with us and made the 2021 People’s Celebration so special. Missed it? Relive the People’s Party on Facebook. Together, we’re building a state – and a world – where each and every person is free to live the joyful, abundant life we all deserve.

Let’s keep the celebration – and the movement – going strong. Make an end-of-year gift to grow and strengthen our work to build a Minnesota where everyone can thrive, no exceptions.  Become a TakeAction member to fuel our work today, and for what’s next.