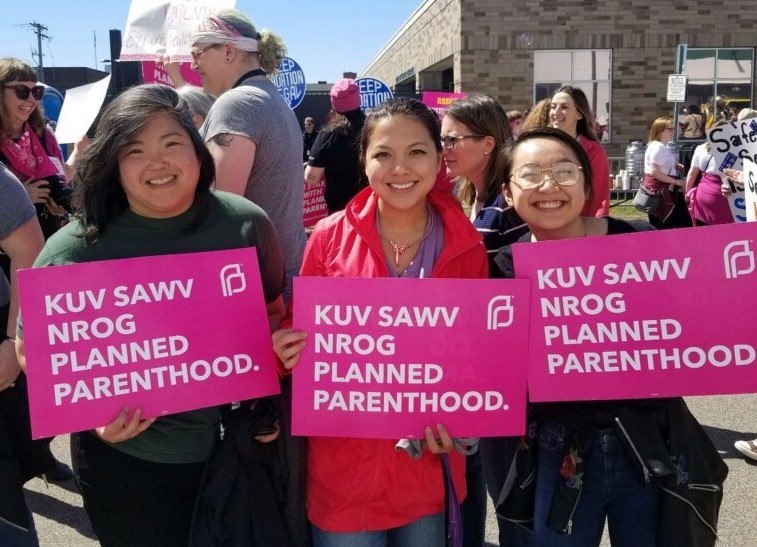 At a young age, I recognized how the systems we live in limit the choices we have about our bodies. I grew up believing the implicit (and sometimes explicit) messages telling me that I had no decision over my body and sexuality. In general, society made those decisions for me. I was told what I could and could not do, what I could and could not believe. Like many others, I learned from an early age that sex and pregnancy were not okay—especially before marriage.

I was told what happened to women and women’s bodies was our fault, and that we had to deal with the consequences on our own. The result was young women in my community — specifically my Hmong community — grow up with a lot of shame.

I found myself stuck between the abstinence-only and anti-choice messages I was surrounded by and my own values of care, community, and agency. Then, when I was 14, my friend got pregnant.

In that moment, I had to decide who and what I believed in.

My friend was scared and nervous. She confided in me, and, as her friend, I responded by supporting her the way she needed to be supported. As a young woman, I found myself listening to her, helping her, and attending appointments with her.

In the Hmong culture, if a woman gets pregnant, it’s tradition that she gets married—not necessarily because she wants to, but because it’s what’s expected.

These expectations centering the “father” are not unique to Hmong culture. In Minnesota, abortion providers are required by law to tell someone seeking an abortion that the “father” is liable for child support. Myths about heterosexuality, marriage, and family are enshrined in laws, and interfere with our doctors’ ability to truly listen and understand the patient in front of them.

I remember the appointment where I sat next to my friend as she told her doctor that she may not be staying with the father of the baby. I remember my shock when the doctor interrogated and shamed her for considering an abortion.

We were young. We didn’t know where to go to get access to an abortion discretely, so my friend ended up having her abortion in a motel room. I was there beside her.

I was 14. I was terrified. She was in a lot of pain, and I didn’t know what to do to help her. I was afraid she wouldn’t make it. We didn’t know where to go to in order to get the proper care she needed. All I remember is that I was very, very scared. And that’s why I knew I needed to be with her, because if I was scared, I couldn’t imagine the fear she was experiencing.

Neither of us can turn back time and get her the care she deserved, but now we both share this story so that those after us can access the care they need.

I hear people talk about what life was like before Roe v. Wade, but for many people, that’s the reality they’re living with right now.

That moment was life-changing for me. It’s when I started following my values and working to make sure people could access the care they deserve, no matter what. It pushed me to be an advocate for strong, progressive policies around reproductive rights, health, and justice.

As an organizer for criminal justice reform, I hear the horrifying stories about people shackled, giving birth in prisons. Stories about women, LGBTQ people, and people of color whose bodies and families are heavily policed. Stories about incarceration separating families—families like my own. These, too, are reproductive justice stories.

We are forced to navigate these inhumane systems every day, and we have to speak the truth about them if we’re going to build something different.

I have a vision for reproductive freedom. One where everybody has access to comprehensive sex education that not only talks about safer sex, but also pleasure, pregnancy, and raising children. Where everybody can access the resources they need, whether they decide to have an abortion or give birth. No matter your age, gender identity, or income, you can receive the care you deserve without shame and without judgement.

We need to invest money into clinics that provide abortion and a full range of reproductive health services. We need to stand up against Crisis Pregnancy Centers that spread misinformation and collectively work to shut down places that don’t reflect our values.

And we need to call on our families, communities, and elected officials to talk about access to safe and affordable abortions for what it is: an act of care.

Nelsie Yang is a TakeAction Minnesota Justice for All organizer. She is a Hmong American daughter of refugees and a current Saint Paul City Council candidate.