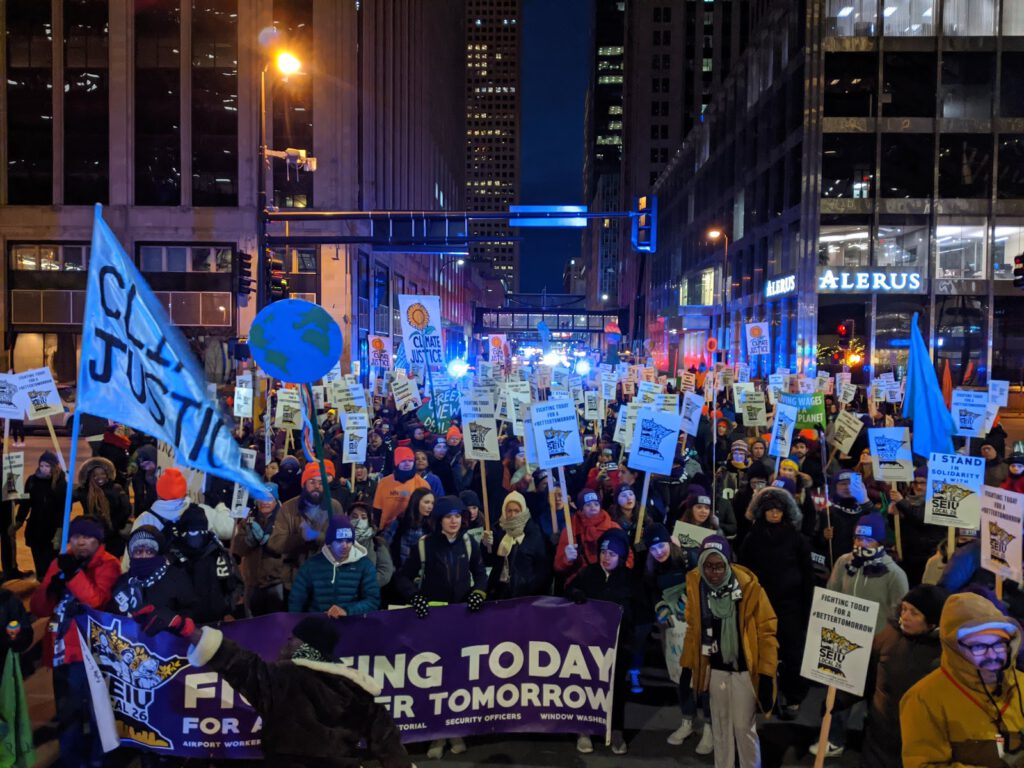 10 años de primavera. 10 years of spring. That is what Guatemalans call the decade from 1944 to 1954, when consecutive presidents Arévalo and Arbenz kicked out extractive U.S. corporations and began instituting reforms in land, education, and healthcare to benefit working-class people. The U.S. government reacted as it often does, and in November of 1960, a CIA-backed military coup began a 36-year war that would use scorched-earth tactics and genocide to regain corporate control in Guatemala.

Raised by a working-class white activist and a political refugee forced to flee that war in Guatemala, I’ve spent my entire life imagining a world where corporations are no longer in power – a world where life comes first. In these visions, issues haven’t appeared in isolation. There has been little separation between housing and food, between fair wages and education, between healthcare and the environment. Humans need all of these things to live a dignified life.

A couple weeks ago, 4000 commercial janitors – members of SEIU Local 26, and largely immigrants – went on strike to demand fair wages and safe working conditions, and to challenge their corporate employers’ inaction on climate. They were joined by Youth Climate Strike, MN 350, Sierra Club, CTUL, Inquilinx Unidxs, and others.

In their demands, SEIU Local 26 union members did something transformational: They expanded what it meant to be an environmentalist, a union member, an immigrant.

When these workers denounce corporate greed and its role in climate change, immigration, and workers’ rights violations, they are connecting dots that corporate America does not want us to connect. Wealthy America intentionally hides truths so that we may remain divided.

For example, in rural areas the right wing politicos are spreading lies that a Green New Deal would criminalize cow farts. In reality, it would mean fair prices for farmers, jobs in a large variety of green sectors, and incentives for water conservation and ecologically friendly practices in areas that have been neglected for decades. In the Green New Deal, Bernie Sanders’ campaign has a vision for taking money out of war and putting it into a green economy. The wealthy know too well that, if we work together, we are a force to be reckoned with.

When striking workers expand their demands beyond wages and benefits, when they ask for social responsibility at a national or international scale, the potential impact of that strike is multiplied tenfold.

Imagine workers across the U.S. participating in a general strike with demands that go beyond the parameters of their employment contracts. Imagine ending business-as-usual and putting the pressure on corporations to actually put people over profits or risk losing their entire workforce. I know our interdependence and solidarity would surpass our wildest imaginations if we were ever to flex our general strike muscles. Perhaps we would get to experience human interconnectedness as a compelling alternative to individual financial independence. So much is possible when we face our discomfort, address our mistakes, heal wounds, and build trust.

The striking members of SEIU Local 26 won because they stuck together. In their tentative agreement, they won a raise, additional sick days, new sexual harassment protections, and a new fund – provided by their employers – that will be used to improve health, safety and environmental sustainability.

It can be easy to stay in our lane – or even to stay home. Yet immigration is tied to climate is tied to labor. And the list goes on. I want for us to join forces, to show up for one another, and to take risks. For all those who are so often left out, and for the future of our children’s children, I ask that you act boldly in solidarity whenever and wherever you are able.