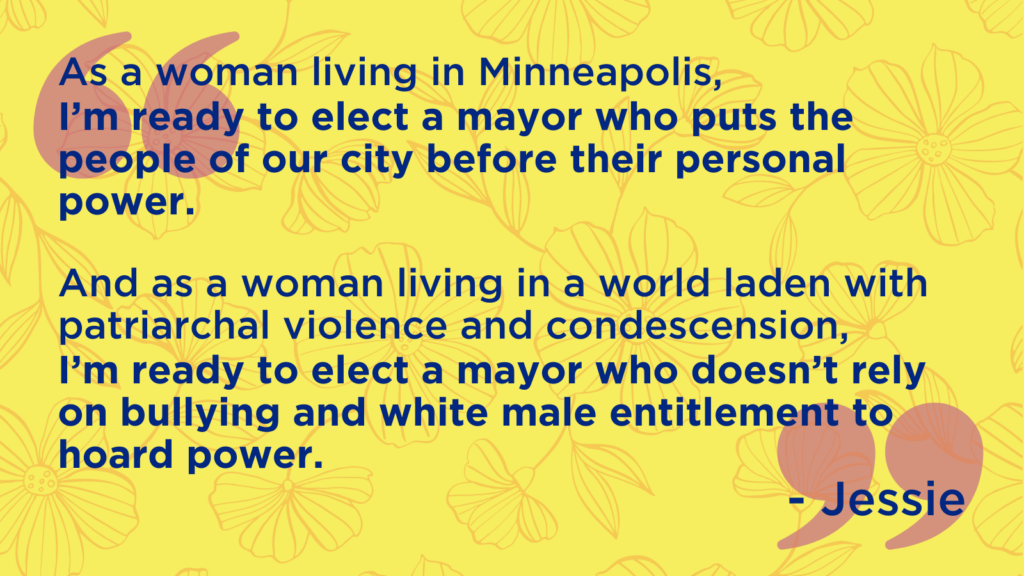 On Tuesday, Sheila Nezhad and Kate Knuth endorsed each other for mayor of Minneapolis. This mutual support demonstrates that they’re already putting the wellbeing of our city and our movement for a progressive majority in City Hall before their own political careers or power.

It’s common sense that we should support candidates who care more about the future of the city than their personal power. The reality is that mayoral incumbent Jacob Frey has a well documented history of lying and fear mongering to protect his personal political power. He’s lied about prominent female politicians’ stances on the issues our city faces to bolster his own positions, and he’s sought out the women who’ve spoken out against him to berate and intimidate them.

I’m ready to elect Kate or Sheila for mayor because I know that when women are represented in our halls of government, we all do better; our democracies thrive, and policies that support care work and families improve all of our livelihoods. I also know that patriarchy and sexism have created a very uneven playing field. In public opinion and the media, women in politics are met with scrutiny and criticism while men are given grace and forgiveness.

Support Sheila’s and Kate’s campaigns with me. Donate today to fuel our political work, volunteer for a doorknock, and make your plan to vote by November 2nd. In Minneapolis, we are ready for a mayor who leads with honesty, care, and integrity. Let’s use the power of our wallets, our community connections, and our votes to win the leadership our city needs and deserves.

Join me in taking action: