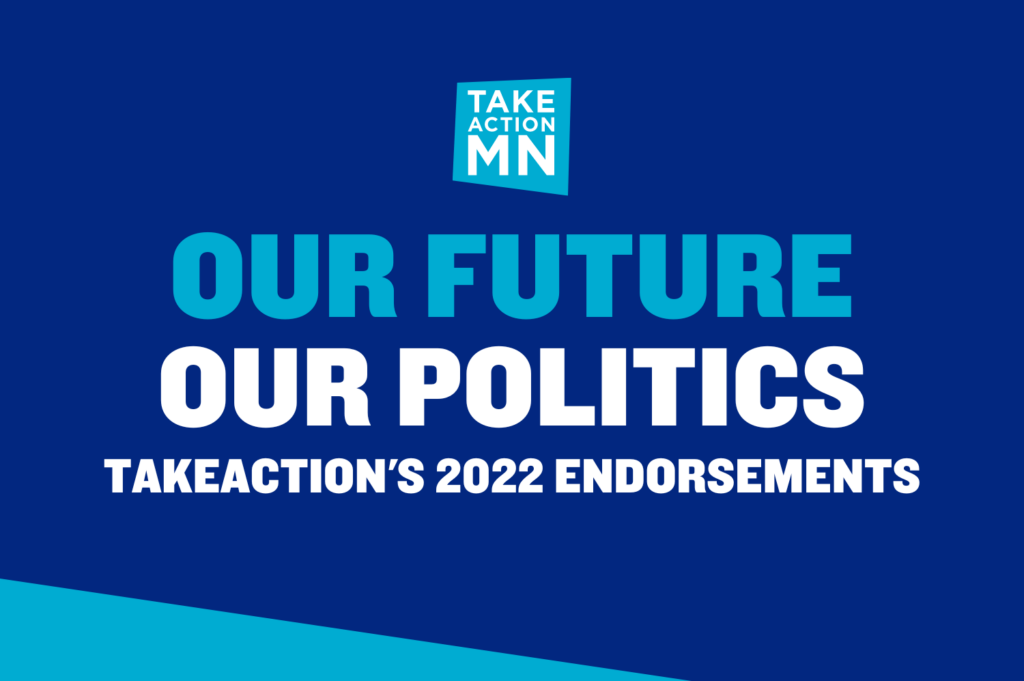 Our future, our politics.

At TakeAction Minnesota, we believe in a politics that is by and for the people. It’s a politics where we care for each other, protect our climate, and support bold leaders operating with the political courage and moral clarity we need to create the future we deserve.

Minnesotans have a choice in front of us: In 2022, we have midterm elections where every statewide office and the entire legislature are up for election, along with a host of August primaries.

The struggles to stop the Enbridge Line 3 tar sands pipeline, to transform public safety beyond policing, to rein in out-of-control prescription drug costs, to decide for ourselves about our reproductive healthcare, and to build a caring economy make one thing clear: it’s never been more important to make our voices heard at the ballot box and build our democracy anew.

Today, we’re excited to announce our full slate of legislative leaders for the 2022 election.

We previously announced our slate of Movement Politics candidates, including state legislators, executive leaders, and candidates for U.S. Congress.

We celebrate these leaders in Movement Politics’ bold stances to act for the people and against corporate greed. They’ve spoken out against Line 3 and violent, unaccountable policing. They’ve stood with our communities and fought for abortion rights, accessible and affordable healthcare and prescription drugs, and a democracy that gives all of us a seat at the table.

Endorsements are a crucial part of our work to set a higher standard for our elected officials and disrupt politics that operate from a place of scarcity and exclusion. We’re building a multiracial democracy where we all can have a say in what our communities need to not just survive, but to thrive.

TakeAction’s member-led political committee knows that in our broken, two-party political system, we can make a difference in our politics by showing up strong in primaries—the summer elections that determine who is on the ballot in November. In addition to influencing who is on the ballot, and eventually in office, we know that higher voter participation in primaries is a key indicator of voter turnout in November, and a pathway to building a more inclusive, multi-racial democracy.

Primaries and electoral politics matter—and they’re only one tool in the box. The challenges we face are bigger than one politician or party. Primaries against incumbents give voters a chance to elect leaders who better fit the values of the district. People-centered primaries build power. Across the country, primary elections are changing politics ‘as it is’ to politics ‘as it should be.’

This year, TakeAction Minnesota will be focusing our electoral efforts on electing champions in key districts and building long-term people and governing power. There are many ways we must take action this election season. TakeAction members are running for office across the state, and others are volunteering to make sure they win. Together, we’re going to have 20,000 conversations with our neighbors to elect people ready to lead boldly and build our movement.

Join us: We’re deep canvassing with community members across Minnesota every Wednesday until November. We’re not only getting people out to vote – we’re building real progressive power through electing bold leaders in the primary and general elections. Sign up for a shift today.