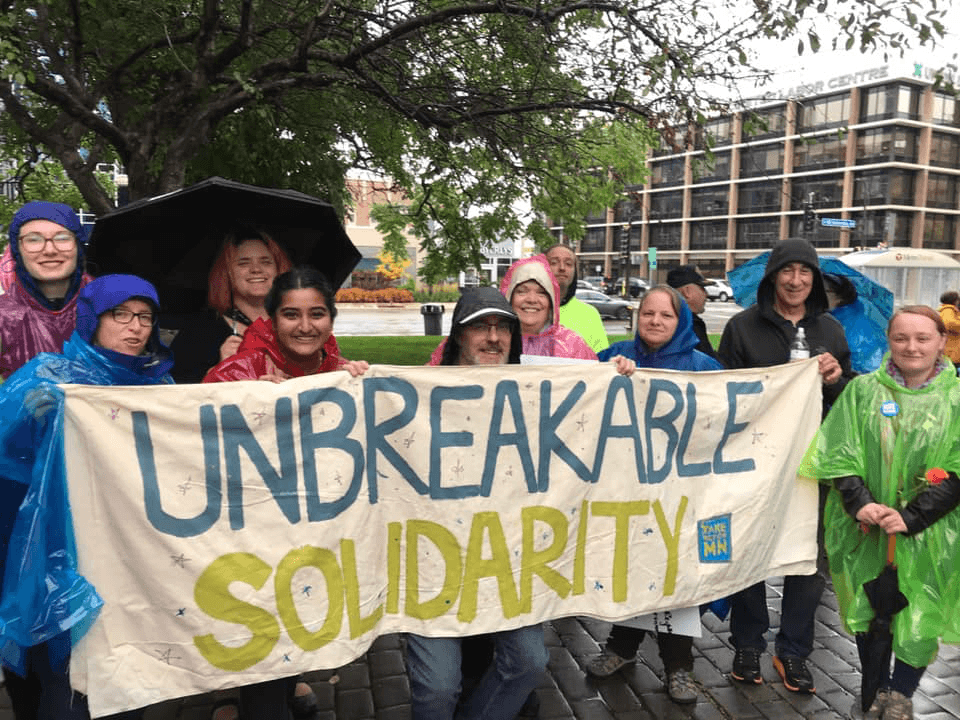 It was a heavy week for us, learning about the murder of Ahmaud Arbery, digesting the state budget deficit, and seeing the unemployment numbers from April.

It feels like we’re going through a collective rite of passage. It is both devastating and a chance for us to grow as a country, recognizing that we have more than enough to take care of each other and knowing that, in the words of Glennon Doyle, “we can do hard things.”

We have one ask for you today: send a quick note of gratitude to Gov. Walz and Lt. Gov. Flanagan. Let’s not be the silent majority supporting their leadership during this crisis. Take a couple minutes to send a message to say thank you.

We’re in this together. Be safe, healthy and warm this weekend. As always, we love to hear from you.

Here’s what we’re reading, watching, and listening to this week:

On February 23, Ahmaud Arbery, a young black man, was shot dead by two white men on his daily jog. It took a video of the murder going viral on social media two and a half months later before his killers were arrested.

Arbery should have been celebrating his 26th birthday today. Instead he was killed by vigilantes for the crime of running while Black.

Systems of oppression hurt all of us. White apathy about Black bodies – whether it’s the killing of a young black man in Georgia or the death rate of COVID19 in Black communities – is deadly.

Read more in Teen Vogue and the New York Times.

The Nation published these beautiful illustrations of essential workers who are keeping our society functioning during this pandemic. See them here.

“I want to live in a society that frees me, as an individual, by freeing my community.”

The battle between individual and communal freedom has been going on since America was founded. Bookmark this piece to read this weekend.

A reader sent in this comic. COVID-19 is providing a test run for how we might respond to the climate crisis. Check out more.

We have more than enough for all in this country, but we need to unrig the rules. The richest 400 Americans hold $2.96 trillion in wealth, and they’re only getting richer during this pandemic. Scroll through this mind-boggling graphic.

Last week, Teen Vogue started a series they’re calling Bread and Roses, unpacking the recent surge of interest in socialism. All of the articles in the series are great, but we recommend starting with this piece imagining how socialist policies could have helped us deal with COVID-19. Read more here.

We could probably fill another Digest this week just with the beautiful, heartbreaking stories we’ve found this week of life during the pandemic.

One of our coworkers, Amanda, sent us this piece earlier this week, and we haven’t been able to stop thinking about it since. Read about a morgue worker in New York, and her lonely effort to bring some dignity to every person who has died recently.

“All moms — and all workers — should have the right to heal and care for loved ones, no matter where they live, where they work or whom they love.”

What time is better than Mother’s Day to fight for paid time to care for all workers? Read more.

ICYMI: earlier this week, our organizers launched an Instagram tv show called Igniting Change. This week, they talked about what we can learn from organizing during past crises like the Great Depression. Watch it here and make sure to follow us @TakeActionMN if you’re on Instagram to see new episodes when they’re posted.

This is a very sweet Twitter thread about a little girl, her mailman, and the impact of writing a letter. Read it here.