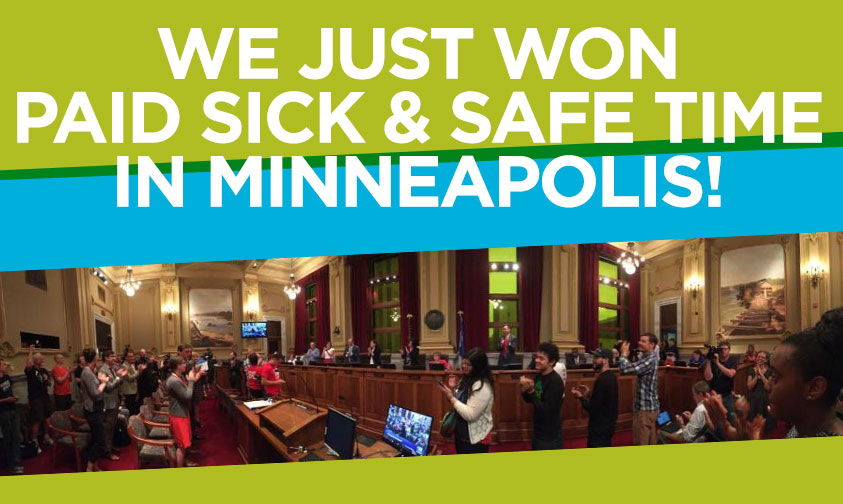 We did it! Driven by the leadership of workers, we won earned sick and safe time in Minneapolis for more than 123,000 people. From now on, all workers will be able to earn up to 6 days of paid sick and safe time. And they will be able to use them without being penalized for it. Join all of us in celebrating this victory by sharing this image! We’ve got to let the whole city know about it.

Minneapolis has joined 25 other cities across the country that’ve passed a similar policy and it’s the very first city in the Midwest to do so. Let’s revisit the work that happened to make this possible.

Last August, with workers in the front lines, we launched #MPLSWorks – an effort to raise standards for working families by passing policies like fair workweek, earned sick time, wage theft protections, and $15 an hour minimum wage.

The Workplace Partnership Group was established in October of 2015 and tasked to create recommendations for an earned sick and safe time ordinance. Liz Doyle, TakeAction Minnesota’s Associate Director, served as Chair and the Group made strong recommendations after hearing from thousands of workers and business owners. Because of a lot of grassroots organizing those recommendations are the backbone of the policy the City Council passed today!

We’ve worked with this courageous progressive champions like Mayor Betsy Hodges and Council members Elizabeth Glidden and Lisa Bender.  Just this month, our members, workers, and other residents met with numerous members of the City Council to stress the importance of supporting a strong earned sick and safe ordinance. We reminded Council Members of their responsibility to help address the crisis working families are facing – especially women, immigrants, and people of color.

Last week, campaign supporters packed the City Council Chamber for a public
hearing with over 100 workers, nurses, teachers, small business owners, and others, all in support of earned sick and safe time. Over 50 people testified in favor of the ordinance.

I can’t stress enough that none of this would’ve been possible if it wasn’t for the leadership of the very people who struggle day-in and day-out without earned sick time – workers. Workers who risked their jobs to organize others. Workers who courageously shared their stories. Workers who transformed the public conversation about working conditions in our state. Workers who are disproportionately people of color and women. We owe them a big thank you for putting the crisis so many face front and center in this debate – and winning real change.

And finally, none of this would’ve been possible without you – if you were a worker who shared a story, someone who came to a rally, or someone who invested your money in this campaign.  Thank you for your standing up – thank you for making a difference. Together, we won a concrete victory for racial and economic justice.

Today, because people organized and stepped forward – because women, immigrants, people of color, and working class white guys like me spoke up together – we put big business on its heels and charted a new path to a better Minnesota.

Thank you for helping make this possible. We are part of a movement that is shaping the future of work in our state. The fight for earned sick and safe time continues. Workers in St. Paul and Duluth have started campaigns in their cities. We’ve got a long journey ahead of us.