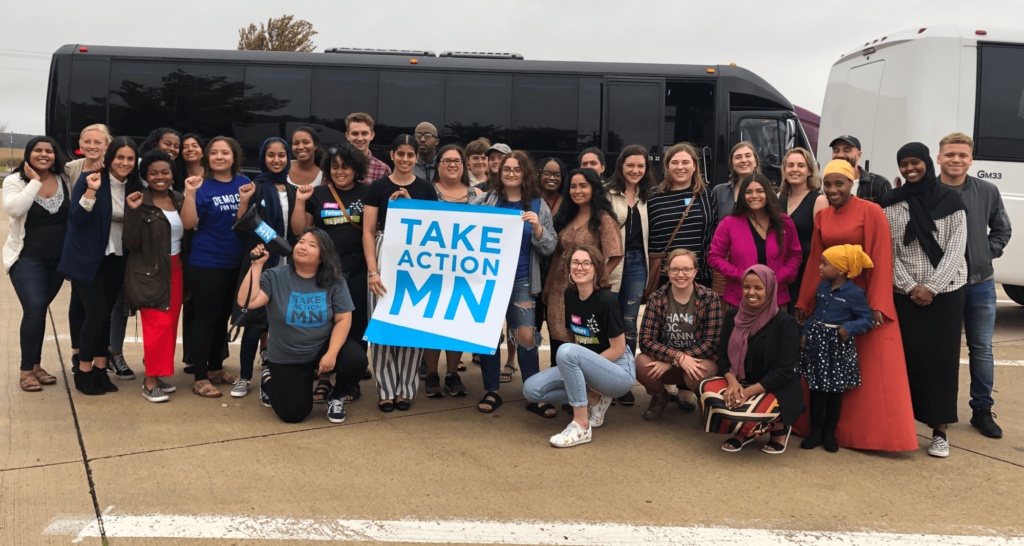 It’s 2020 and a huge election year. The upcoming state and national elections may be the most important ones of our lifetime.

For the first time since 1992, Minnesota will hold a presidential primary election on March 3, instead of a preference poll at party caucuses (which are also happening).

This means that for many Minnesotans, this will be our FIRST TIME voting in a presidential primary election.

Here’s the thing: the presidential primary election is really important.

All of us–women, people of color, young people, working class voters, parents, and people from all walks of life get to decide who’s on the ballot in November. As primary election voters, we have the opportunity to shape the direction of our country and make sure the values we care about are represented at the ballot box.

What could be more exciting?

We created this guide because we know you’re busy—but you want to be informed. Keep reading to get up to speed.

Be a Presidential Primary Voter

Anyone who is registered to vote in Minnesota can cast a ballot in the primary. Voting will take place at normal polling places.

In order to vote in Minnesota, you must be a U.S. citizen, at least 18 years old on Election Day, and have lived in the state for at least 20 days. If you have had a felony conviction, you must be finished with all parts of your sentence (aka off paper). Does that describe you?

Register to vote online or on paper right now–the last day to pre-register before the presidential primary is February 11.

If you’re not registered to vote before February 11, you can same-day register on primary Election Day.

Notice anything special about that date?

Hint: It’s before both the New Hampshire Primary (February 11th) and the Iowa Caucus (February 3rd).

That’s right: Minnesota is the first state in the country to begin to vote for president.

Our state early voting laws specify that voting begins 46 days before Election Day. That means you can vote in person or by mail before your grandma in Iowa.

Fourteen states, one U.S. territory, and citizens living abroad will be voting in the presidential primary on March 3, 2020 known as Super Tuesday. There are a lot of delegates available to presidential candidates, and they’ll be paying special attention to voters here. State delegates are chosen through the party convention process at the Congressional and State levels and decide who’s nominated to run for President at national conventions in July.

For nearly 30 years, Minnesotans had to show up to caucuses to support our choice for President. To make the process more accessible and respond to incredibly high caucus turnout in 2016, the state moved to a presidential primary.

There are two questions you need to answer when you go to vote in the primary.

1. Which primary do you want to vote in? You can choose to vote either in the Democratic Primary or in the Republican Primary. You can’t vote in both. Each party has a separate ballot.

2. Who are you supporting? There are FIFTEEN Candidates who will appear on the Democratic Primary ballot plus an Uncommitted option. On the Republican ballot, you can vote for Donald Trump or write-in a candidate. (Even candidates who have dropped out of the race will appear on your ballot.)