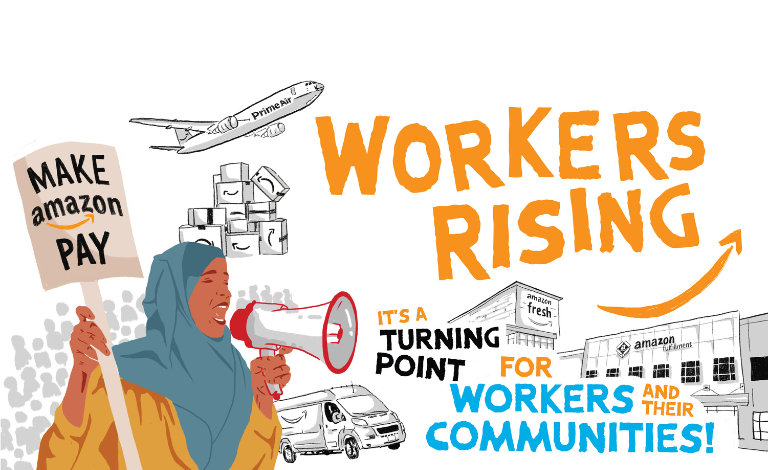 I’ve spent the past year researching Amazon for Awood Center, an organization dedicated to building East African worker power. When I started my research, I quickly realized that Amazon isn’t just an online retail company – it touches nearly every aspect of our lives.

Amazon hosts vast portions of the internet and stores massive amounts of government data; dominates global logistics (how things get from Point A to Point B); offers loans to businesses; provides satellite internet; is a pharmacy, media production company, and fashion label; and holds lucrative contracts with violent arms of the state, including Immigration and Customs Enforcement (ICE), the Department of Homeland Security (DHS), the National Security Agency (NSA), and the Federal Bureau of Investigation (FBI).

Amazon is an essential data and services company disguised as an online marketplace – and it’s a problem when any corporation exerts this much control over our lives.

Amazon is expanding rapidly in Minnesota, and not slowing down anytime soon. The company opened its first fulfillment center in Shakopee in 2016. By 2020, no industry in Minnesota had a higher average injury rate than Amazon. Since coming to Minnesota, Amazon has destroyed small businesses across our state with its monopolistic practices, expanded community and state surveillance while funding police, and polluted our air and water with its network of planes and delivery vehicles.

We’re at a turning point in the fight against Amazon. The corporate giant plans to open two new distribution centers in Woodbury and Centerville – in addition to the Shakopee fulfillment center and warehouse facilities in St. Cloud, Lakeville, Maple Grove, Eagan, and Brooklyn Park that are currently operating. The company also owns Whole Foods Market, with seven locations in Minnesota, and plans to open six new AmazonFresh grocery stores in Twin Cities suburbs.

This is a critical moment to take bold action on climate and worker standards.

Amazon is now the second largest private employer in the United States. We are demanding that the  corporation treat workers with dignity and respect – from the people who handle Amazon cargo at the airport to those who distribute Amazon packages across the country. At the same time, Amazon must take responsibility for its impact on our air, water, and the communities that we – Amazon’s workers and customers – call home.

The resistance to Amazon’s expansion began here in Minnesota, when East African Amazon workers led the first coordinated strike at an Amazon warehouse in North America. Now, Minnesota can lead the country by taking bold action on climate AND worker standards.