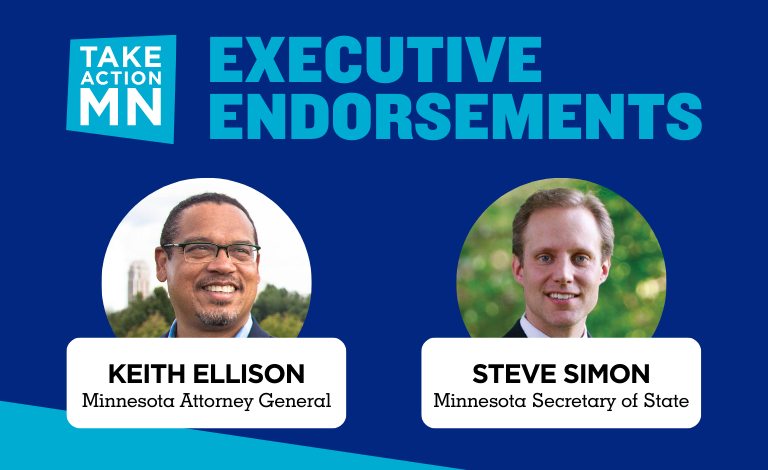 This election season, every single state-level seat —including the Governor and Lt. Governor, Attorney General, Secretary of State, State Auditor, and the entire Legislature —is on the ballot.

TakeAction Minnesota is proud to announce our endorsement of Keith Ellison for Attorney General and Steve Simon for Secretary of State. 🎉

As the People’s Lawyer, Keith Ellison knows that every person counts, and every person matters. In his first term as Attorney General, he used the full power of his office to hold corporations accountable, support women’s economic security, and prosecute the ex-police officers who murdered George Floyd. When many high-ranking elected officials refused to acknowledge the failures of the Minneapolis Police Department and opposed City Question 2, Keith Ellison supported the creation of a new Department of Public Safety–the Minneapolis Police Department is now coming under a consent decree with the State for its pattern and practices of racial discrimination and human rights violations.

These are just a few of Keith Ellison’s notable actions and accomplishments as Attorney General:

As Attorney General, Keith Ellison has gone to bat for the people of Minnesota, leading with moral clarity and political courage. We have his back and are ready to throw down for his re-election.

For the first time in years, TakeAction Minnesota’s political committee decided to endorse in the race for Secretary of State. As attacks on our democracy intensified under the Trump Administration, the role of our state elections administrator became more important than ever.

As Secretary of State, Steve Simon has been a quiet but key leader:

We’ll soon be sharing a few facts about the GOP candidates running for Attorney General and Secretary of State. In the meantime, let us know why YOU support Keith Ellison and Steve Simon. Have questions? Send us an email.