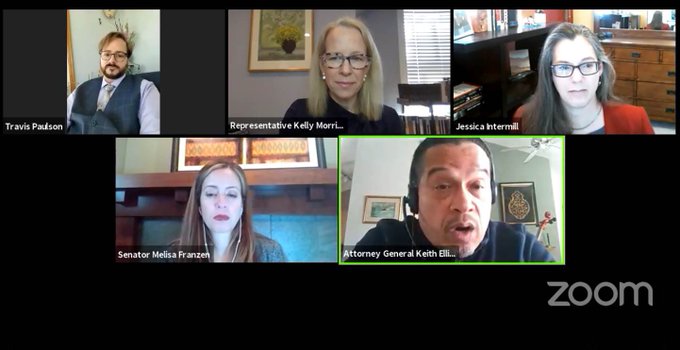 Attorney General Keith Ellison, patients, and legislators call for action on affordable medicine ahead of Prescription Drug Affordability Board hearing

SAINT PAUL, Minn–Travis Paulson calls himself a medical refugee. Before COVID, he was among the Minnesotans caravanning to Canada for insulin. Growing up, insulin was affordable. But by the time he turned 30 he lost nearly everything trying to afford insulin that cost $1,500 per month.

Today, a bill to create a Prescription Drug Affordability Board gets its first committee hearing of the year. With power to rein in certain high-cost drugs, the Board is being championed as one of the state’s best tools to address this growing challenge.

“My situation is not unique,” said Paulson “Countless life-sustaining medications are priced out of reach for middle class and working families.”

Jessica Intermill, a lawyer and mother from Minneapolis, is among the patients calling for a Prescription Drug Affordability Board. Her medicine to treat Rheumatoid arthritis costs a staggering $56,000 per year, every year.

“The costs of prescription drugs continue to skyrocket in the U.S., even during a global pandemic, making it difficult for Minnesotans to afford their prescriptions,” said physician and chief author Rep. Kelly Morrison. “As a doctor, I regularly see the cost of drugs interfere with my ability to successfully treat my patients when they cannot afford the medicine they need. Unless we do more to keep costs down, more people will not be able to afford their drugs leading to poorer health outcomes and higher health care costs.”

“Minnesota has a track record of making progress on prescription drug cost issues, even in a divided Legislature,” said Sen. Melisa Franzen, chief author in the Senate. “We know this is a life and death issue for Minnesotans, and it has a significant impact on constituents across the state. I am committed to working collaboratively with every stakeholder to address this important issue of price transparency and affordability.”

Attorney General Keith Ellison lifted up the Board as the number one recommendation of the bipartisan Task Force, and an idea whose time has come. “It is going to take a big lift to make this law,” said Ellison. “It’s going to take people-power. We need to do this together with our legislators and with our community to push this over the finish line.”