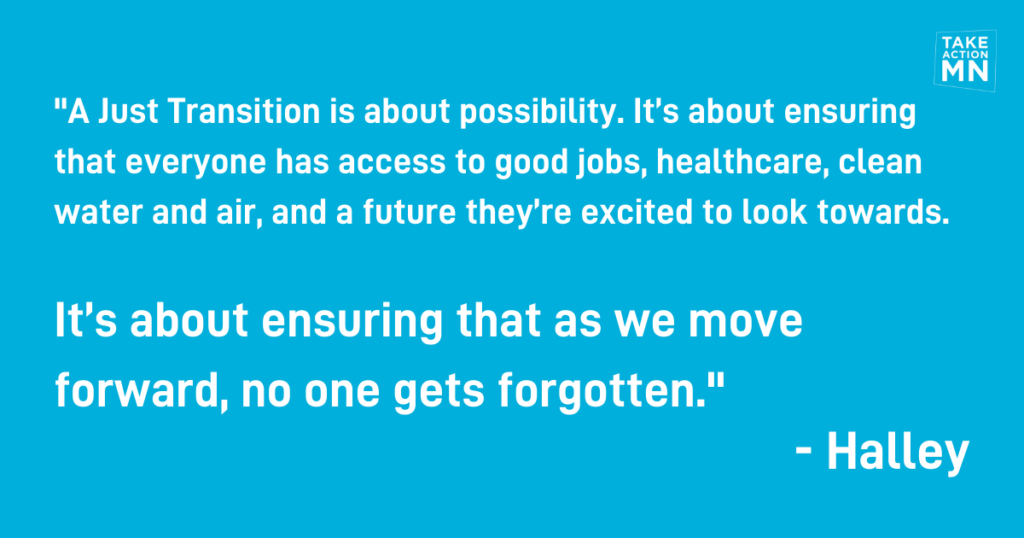 For me, one of the hardest things to envision about the Climate Crisis is what a better future could look like. So many of us can imagine the scary things – increasing fires, polluted water and air, extreme temperatures – but we can’t imagine what true climate justice is. We’ve never been given the tools to imagine what something better could even be, which keeps us from making it real.

Recently, as I’ve been talking to people across Minnesota about the Stop Line 3 movement, the questions that come up most are ‘but we’re just not ready to move away from oil’ and ‘but what about our jobs’. Many people don’t love the pipeline and recognize its risks, but don’t think we’ll be able to get by without the oil it will provide, or fear being unable to support their families without the jobs its construction creates. They haven’t been given the tools to imagine an alternative, but it’s more than that – to start seeing that alternative as possible, they need to know they won’t be left behind as we move forward. This is true too when we talk about electric busses that will only run through wealthy neighborhoods, about healthcare and childcare that doesn’t reach low income neighborhoods or communities with high rates of pollution and environmental health concerns, or housing that prioritizes the needs of developers and landlords over those of residents.

So many times, when public leaders talk about major policy changes that are supposed to help our communities, the people they end up helping the most are those who need help the least. A Just Transition would change that.

Right now, many of our elected officials don’t see that possibility; their focus is more on policy that prevents disaster than on policy that makes our lives better. Our stories and our vision for the future can change that. We need to be the guiding force to help those in power see what is possible through a Just Transition.