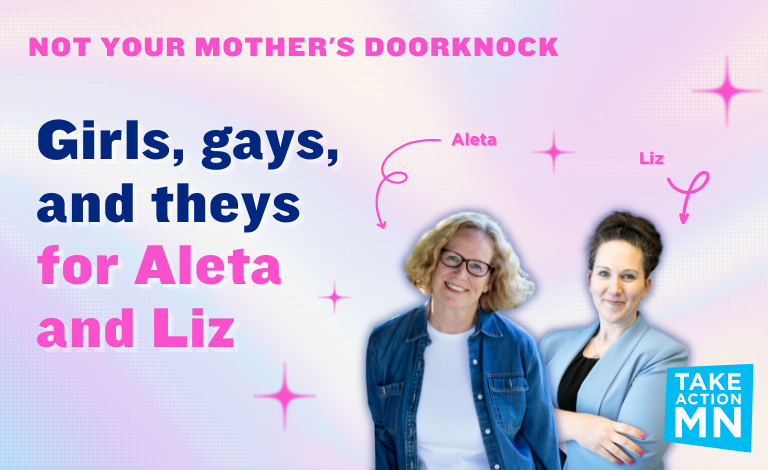 On Thursday, October 20 and Friday, October 21, join us for a Deep Canvass door knock blitz in support of Aleta Borrud and Liz Boldon – two candidates for Minnesota Senate committed to protecting LGBTQ+ rights and reproductive freedom.

Why care about these races? One of the organizers of our door knock blitz, TakeAction leader Brian, shared their thoughts in a Q&A. Read our conversation below.

LP: Why should folks turn out to this event?

Brian: I view door knocking – and Deep Canvassing in particular – as an act of care towards other people in your community. You’re taking the time to listen to your neighbors about what matters to them. You’re not just saying, “vote for this person,” and moving on. The opportunity to be heard is therapeutic for people in our community. It’s also therapeutic to be the one listening. With Deep Canvassing, there can be conversations that, little by little, restore some of your faith in humanity.

If you show up for our blitz, that’s an act of care in another way, too. You’re showing up in solidarity with queer folks in the Rochester across the state. Right now, the GOP is working hard to take away our basic rights. We need to fight back, and we can’t do this alone.

LP: I love your title for this event: “Girls, Gays, and Theys for Aleta and Liz.” Why that title?

Brian: I’m invested in organizing the queer community in the Rochester area. I want there to be more healthy and safe spaces for us to meet. There’s a growing queer community in Rochester and in the surrounding area. Rochester can be accepting, but the fact is, we’re surrounded by more conservative communities. It can be particularly tough for queer people who live in what we call “bedroom communities” and commute to Rochester to work. These communities are cheaper to live in, but it comes at a cost of living in an area that isn’t as accepting of your identity. It’s important queer people here can come together, be there for one another, and build power to protect our rights.

LP: Any words of wisdom for first-time door knockers? Or for folks who are invested in this race, but anxious to get out there?

Brian: I’ve never door knocked myself, so for everyone who comes, I’ll be learning with you. To be frank, I’d rather not door knock, but there’s a lot on the line. In order to flip the Senate, we need to win Aleta and Liz’s races. The path to do that goes through Rochester.

If you’re nervous to get out there, I get it. From what I’ve heard, though, people in the Rochester area just want to feel heard. If you can show up and listen, that really goes a long way.

LP: What’s at stake in these races?

Brian: If we flip control of the Senate and keep the House, we could advance so many issues that are critical to the LGBTQ+ community. There are four that come to mind immediately.

These are just a few things on my mind. The bottom line is, if we get everyone who cares about the LGBTQ+ community to vote for champions like Aleta and Liz, we could win a lot.

LP: Why do you support Aleta and Liz?

I love these two so much. You have no idea.

Aleta Borrud, running to represent Minnesota Senate District 24, is a retired doctor, and highly qualified to fight for the LGBTQ+ community and women on key issues, including reproductive freedom.

Aleta makes you feel heard. She also acknowledges the contributions you’re making to your community – however small. She makes you feel like you matter, and I think that’s an important quality in a leader. She sees the intrinsic value in the people she wants to represent.

Liz Boldon, running to represent Minnesota Senate District 25, is a nurse. She’s straight-to-the-point and compassionate. She knows that there are so many people who are hurting right now, and she’s doing all she can as a nurse and legislator to care for her community.

I’m also amazed at Liz’s dedication – even in times of crisis. Last session, her son was in a terrible car accident. She kept showing up for her community even as she was caring for her son, joining Senate committee hearings via Zoom from the hospital. Liz is the compassionate leader we need and deserve right now.

LP: Thanks, Brian. It’s great to get your perspective on Liz, Aleta, and why these races are so important. Excited to knock doors with you!

Sign up now to get out the vote for Aleta and Liz – candidates ready to lead with compassion and protect LGBTQ+ rights and reproductive freedom.