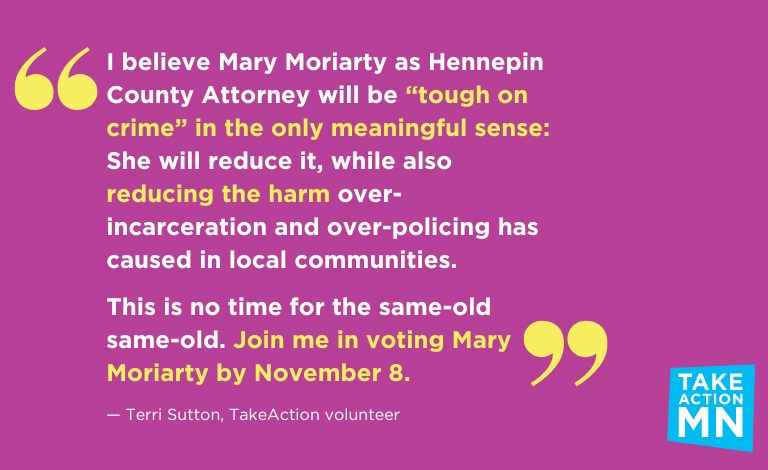 I’m still thinking about Jaleel Stallings. I am troubled still that Mike Freeman’s Hennepin County Attorney office filed attempted murder charges against the Army veteran, who fired back at an unmarked police van thinking white supremacists were shooting at him, five days after George Floyd’s murder. Unsettlingly, the body cam footage, which clearly showed a brutalizing Minneapolis SWAT team, was completely at odds with the County Attorney’s narrative. Stallings was later acquitted on all charges and received a $1.5 million settlement from the city of Minneapolis.

It haunts me that a more frightened man might have taken the plea deal—and be serving a 13-year sentence. It haunts me that the County Attorney must have seen the police and security camera videos and still chose to prosecute the case. It haunts me so much was wasted: Stallings’ time and health; attorney, judge, police, and court room expenses; public resources that could have been invested in our community.

I’m thinking of Stallings’ experience again because Hennepin County voters are for the first time in 15 years facing a county attorney election without a candidate with previous experience in the role. And the difference between the two leading candidates is stark. Former public defender Mary Moriarty has publicly noted that, given the evidence, it was unreasonable for the County Attorney to prosecute Stallings. Further, Moriarty has pledged to create a police accountability unit within the office of the County Attorney.

Meanwhile, Martha Holton Dimick has sought, received, and proudly advertises her endorsement by the Minnesota Police and Peace Officers Association, the association of police unions that funded Derek Chauvin’s defense.

A proponent of the same status quo that landed us here, Dimick has tried to paint Moriarty as a “defunder.” She is not. As Moriarty states on her website, she will support law enforcement in investigating and her attorneys in prosecuting violent crimes. A public defender in Hennepin County for three decades, and Chief Public Defender for six, Moriarty has cared enough about the criminal justice system to educate herself about effective, data-based policy. As she has said, “As chief public defender I viewed it as my duty to use what we learned about crime and violence, root causes, and potential solutions at the individual client level to more broadly impact our community.”

One of those root causes is substance abuse. Moriarty sees addiction as a public health crisis and would invest in more people receiving intervention and treatment—rather than being locked up, released, locked up again, etc. Moriarty has experience here as well: For six years, she chaired the Hennepin County Behavioral Health Committee, collaborating with police departments, social workers, and prosecutors to envision better ways than jail time for supporting people with substance abuse problems. Given that as much as 65 percent of the US prison population may have an active substance use disorder, such data-driven investments could be transformative in reducing harm and increasing safety in our communities.

Police brutality and over-incarceration are inefficient, expensive, and wasteful of resources, time, and human potential. As Chief Public Defender, Mary Moriarty built a nationally recognized public law office, managing a staff of over 200 with integrity, vision, and accountability. As Hennepin County Attorney, Moriarty will lead the largest public law office in Minnesota with those same values, initiating data-supported changes that will result in a fairer and less wasteful system for all county residents.

I believe Moriarty as Hennepin County Attorney will be “tough on crime” in the only meaningful sense: She will reduce it, while also reducing the harm over-incarceration and over-policing has caused in local communities. This is no time for the same-old same-old. Moriarty is eminently experienced, smart, and impatient with ineffective, wasteful policies. Join me in voting Mary Moriarty by November 8. Make your plan to vote.