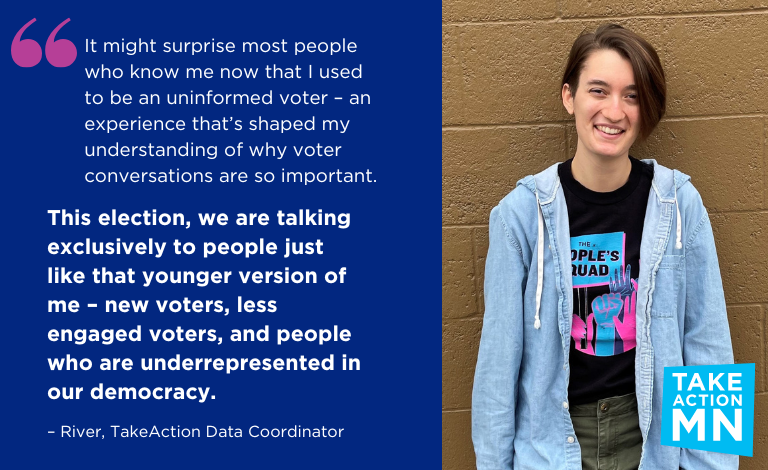 As TakeAction Minnesota’s data coordinator, I’m deeply invested in my work with our Field Team, using data to reach and mobilize voters for progressive, people-centered candidates and the communities we deserve. So, it might surprise most people who know me now that I used to be an uninformed voter – an experience that’s shaped my understanding of why voter conversations are so important.

The first time I voted as a teenager, I went to the polls on a whim. My AP Government teacher mentioned it was Election Day (and I didn’t want to do my homework after school), so I headed to my polling place at a local church. I didn’t even Google any of the candidates. I just voted for people whose names looked cool on the ballot.

The next day at school, I mentioned to one of my friends that I’d voted the previous day. They asked, “Did you vote for people who are going to fight for people like us?” It was 2015, and gay marriage had just been legalized by the Supreme Court. That conversation was the first time I realized that my rights as a queer person were quite literally on the ballot. My vote was going to directly impact my life.

This election, we are talking exclusively to people just like that younger version of me – new voters, less engaged voters, and people who are underrepresented in our democracy. We have deeply relational conversations – like the one my friend had with me – with most of the people we canvass. We ask each voter curious questions about their stories, the issues that matter to them, and their values, and how those connect to who is on their ballot. This conversational framework is called Deep Canvassing.

These conversations give voters – like the younger version of myself – space to think, to get grounded in the stakes of the election for themselves and their community, and understand why their vote matters. Practically, it’s also a space for voters to concretely lay out their voting plan – from finding their polling place to planning what time to vote.

An important part of my role at TakeAction is data analysis, and I can see that what we’re doing works. On primary election day this August, we turned out 11,735 people to the polls, and got hundreds to also turn out their friends. We know that the conversations in the final days – and yes, hours – before the polls close really matter.

In the primaries, people we followed up with close to the election were 28.9% more likely to actually vote than people we didn’t follow up with. I believe we can get even more people to the polls this general election. When we work together, our impact is powerful. TakeAction fellows, volunteers, and staff just hit our goal of 17,500 conversations with voters this election season!

As important as this election is, I believe in this work so strongly because I know that we’re in it for the long-term. We aren’t just having conversations to have conversations; we’re mobilizing voters to rise up in this election and beyond.

Our Deep Canvassing conversations have a lasting impact. Political scientists have conducted studies that suggest conversations using this framework impact voters for at least 3-6 months after they’re canvassed. And, as TakeAction’s data person and list creator, I am determined that everyone we’ve built power with this election cycle continues to be invited into our powerful work.

Join us now to have powerful conversations with voters and be part of our people-centered movement.