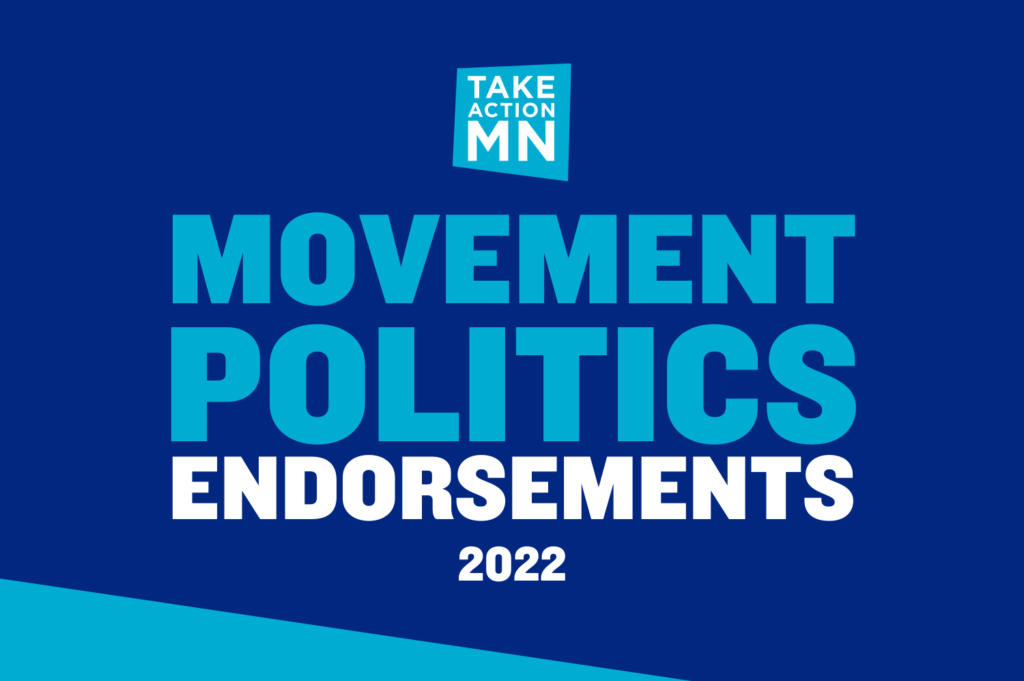 Maye Quade, a former state Representative and candidate for Lt. Governor made national headlines this spring when she went into labor during her district’s DFL endorsing convention. Dr. Borrud, a physician and leader in progressive politics, is running to flip a state Senate seat in Rochester. She narrowly lost her bid for the seat in 2020. Both candidates are champions for safe communities, affordable health care, and reproductive freedom, and are running in competitive races.

“TakeAction Minnesota is proud to endorse this slate of progressive and movement-aligned candidates,” said Megan Boyle, co-chair of TakeAction’s member-led political committee. “Each of these TakeAction Minnesota Movement Politics endorsed candidates exhibit progressive consistency, a knack for organizing and leadership development inside and outside of the State Capitol, and have used their voice and power at critical moments to advance bold solutions for racial, gender, economic, climate, and reproductive justice. While many electeds have disappointed us with their inaction in recent moments of crisis around police violence, the Enbridge Line 3 pipeline, and care and safety for our families, the Movement Politics slate of candidates offers examples of leaders who are leveraging every ounce of power they have for Minnesotans.

“Movement politics is about putting people at the center of our decision-making. It is about organizing with courage and clarity inside and outside government to advance solutions that meet the scale of the crises communities across our state face. No single candidate can bring about the change we need, but by banding together we can achieve great things,” said Elianne Farhat, executive director of TakeAction Minnesota. “This election season, TakeAction Minnesota is prioritizing our members and progressive leaders committed to building power for a people-centered democracy. Our work this year is to win in key races and to build grassroots political power beyond this election cycle. We’re preparing our largest field operation to date, focused on deep canvassing thousands of Minnesotans across the state.”

TakeAction Minnesota is a statewide, independent, multiracial people’s organization working to advance democracy and equity through organizing, political action, and campaigns. The organization has offices in St. Paul, Duluth, and St. Cloud.