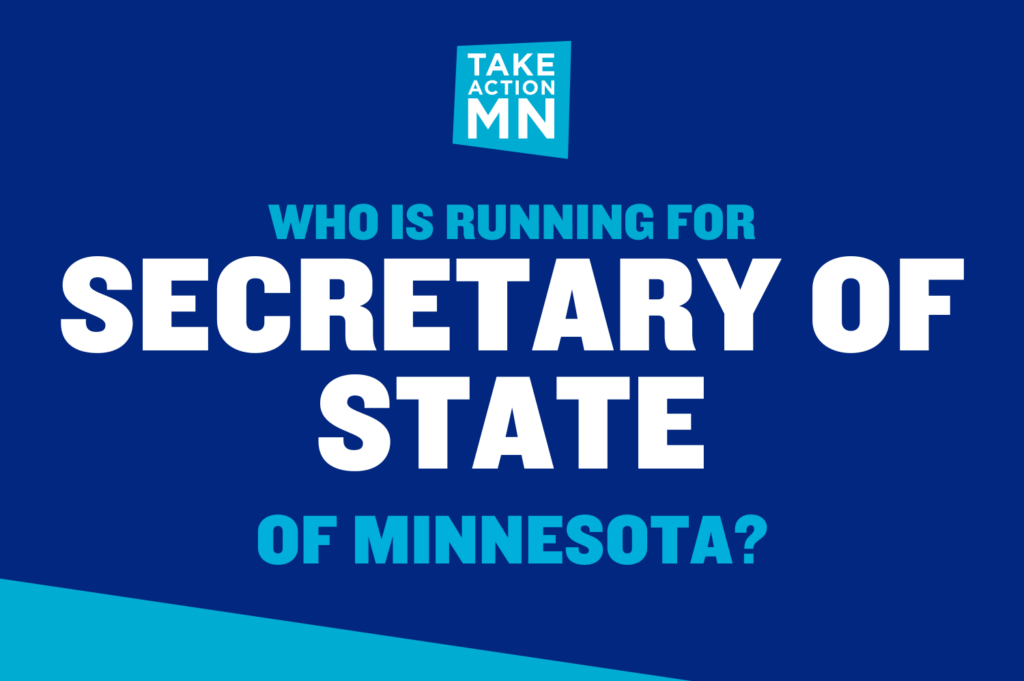 Who is running for Secretary of State in Minnesota?

On November 8, 2022, Minnesotans will elect candidates for the Office of the Attorney General, Secretary of State, State Auditor and Governor at the top of the ticket. The entire state Legislature is also up for election. The DFL and TakeAction-endorsed candidate for Secretary of State is Steve Simon. His GOP-endorsed opponent is Kim Crockett, running as an election denier.

Here’s what you need to know about GOP-endorsed candidate for Secretary of State Kim Crockett.

First, what does the Secretary of State do?

Who is Kim Crockett?

Kim Crockett is a former staffer at the right-wing Center for the American Experiment think tank (the one who was suspended in 2019 for her racist comments to the New York Times). She’s among a national wave of Trump Republicans running for Secretary of State claiming the 2020 election was “rigged.” Kim Crockett is running on voter restriction policies, including photo ID requirements that were soundly rejected by Minnesota voters in 2012. In addition to her track record of racism, antisemitism, and questioning whether citizens who have a disability or do not speak English should have the right to vote, she is using her candidacy to spread misinformation about our elections. When election deniers like Kim Crockett are elected Secretary of State, they have real power to restrict voting rights (like ending vote by mail) and can go as far as refusing to certify election results. Learn more: When an election denier becomes an election chief.

Who is Secretary of State Steve Simon?

Steve Simon was elected Secretary of State in Minnesota in 2014 after previously serving in the state House. As a legislator, Steve Simon was a champion of voting rights and helped defeat the voter restriction amendment, rejected by Minnesota voters in 2012. He authored legislation to reduce barriers to absentee voting and enact online voter registration. As Secretary of State, Minnesota led the nation in voter turnout under Simon’s leadership in 2016, 2018, and 2020. His proactive leadership during COVID-19 got every eligible voter an absentee ballot application—this ensured voters knew that during the pandemic, they could vote safely by mail. In addition to running clean, fair, and accessible elections, Steve Simon has been a clear, trusted voice combatting misinformation.