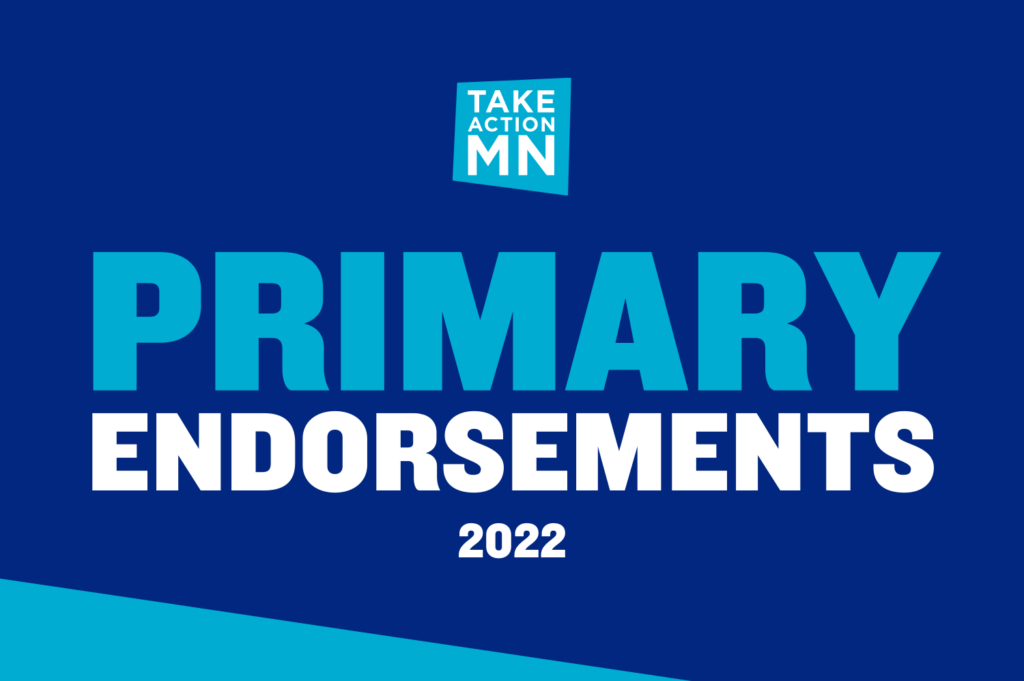 We at TakeAction Minnesota are excited to endorse a slate of candidates who are running in competitive primaries. These races give us a chance to look deeper at how our political system is or is not serving us. We’ve been talking about how ‘Not Just Any Blue Will Do.’ That choice is always starkest when we’re looking at two candidates from the same party.

This year, when the TakeAction Minnesota Political Committee was weighing endorsement within competitive primary races, we saw an opportunity to truly imagine the politics we hope to build. Some of the considerations members waded through were:

This intentional, focused approach to screening and endorsing candidates – especially those in competitive primaries – inspired our committee to make bold choices in key races where we saw opportunity to build progressive power by supporting candidates challenging establishment Democrats, who aren’t afraid to take on and disrupt the status quo in order to create more just, inclusive, and people-centered democracy.

As people building statewide, multiracial political power, it is our responsibility to seek out values-driven, accountable, visionary leaders and to get in deep relationship with them. We’re proud of the values that our endorsed candidates exhibit – not just with their words, but with their actions. We believe that bold, visionary candidates like these individuals are necessary to win – not only on election day, but to win transformative change.

Together, we’re building a better future – one where our planet is protected, not exploited; and our people are cared for, with access to affordable health care and medicine; freedom to make our own reproductive choices; safe and secure housing; clean air to breathe and water to drink; and honest, inclusive education where every child is able to learn and thrive.

Join us in making this just, joyful vision a reality. Check out our slate of endorsements, make your plan to vote, and sign up for a door knock or phone bank shift. We need all of us in this fight – the future depends on it.