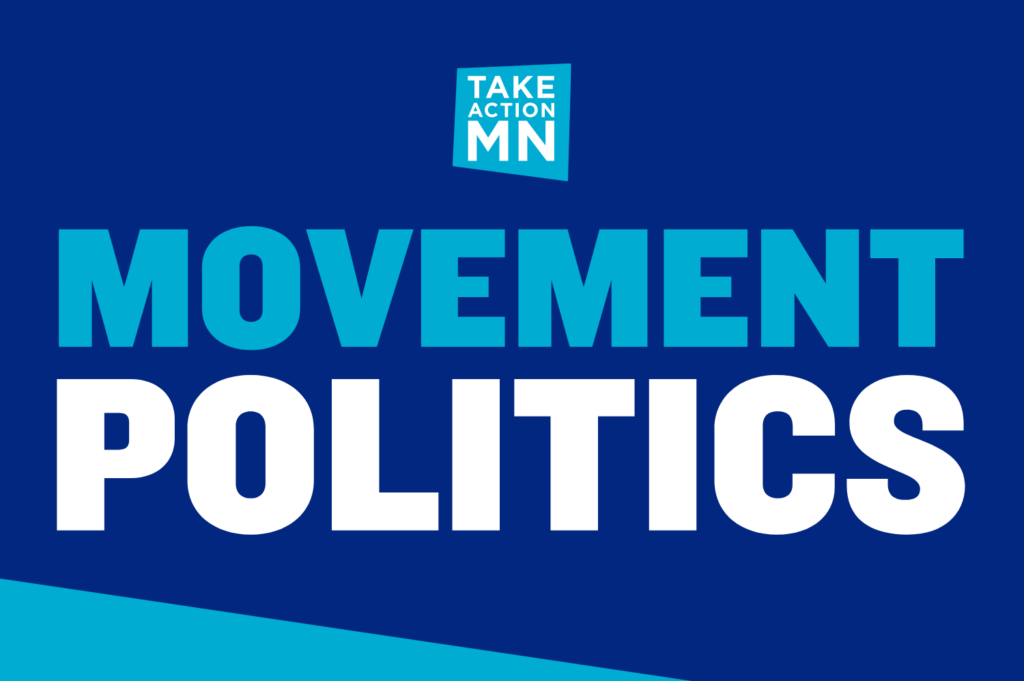 At TakeAction Minnesota, we came into this election season clear on the stakes and challenges of this moment. At every level of government, we know that we need more than Democratic majorities to protect our reproductive rights, climate, and democracy. We need progressive leaders in office who will be champions with us to transition from fossil fuels, transform public safety beyond policing, build a caring economy, and deliver reproductive justice.

Our member leaders made powerful endorsements for movement candidates, especially in key primary elections. Our first round of endorsements highlighted candidates who are deeply connected to grassroots movements and have a track record of standing up to corporate interests. These movement leaders have spoken out against Line 3 and violent, unaccountable policing. They’ve stood with our communities and fought for abortion rights, accessible and affordable healthcare, and a democracy that gives all of us a seat at the table.

This intentional, focused approach to screening and endorsing candidates – especially those in competitive primaries – inspired our political committee to make bold choices in key races where we saw opportunity to build progressive power by supporting candidates challenging status quo politicians, who aren’t afraid to take on and disrupt politics as it is, and do politics as it should be, in order to create a more just, inclusive, and people-centered democracy.

If we, people who are politically active and engaged, feel frustrated and let down by the lack of progress, then we aren’t alone. We see from our own experience and national studies, that our communities – particularly young people and Black, Indigenous, and People of Color – are eager for change and that change has not been delivered.

Therefore, we must meet people right where they are: in their frustration, in their stories and their hope, in their desire for a world that we all have a stake in fighting for. On their doorsteps and phones. By connecting with folks in a real way, our hope was that we could

1) disrupt narratives that tell people our democracy isn’t worth participating in;

2) move folks to level up their voting power by voting in primaries for the first time; and

3) vote for candidates that are committed to taking on the status quo and making change happen.

12 out of 14 TakeAction-endorsed candidates won their primary elections in competitive state, local, and federal races. Nearly half the voters we talked to ahead of the Aug. 9th primary had never voted in a primary before. Our conversations contributed significantly to the vote counts of our candidates. Sometimes, like in the case of Mai Chong Xiong in Ramsey County, the number of voters we talked to in that race exceeded the total number of votes the candidate won by. That’s solid proof that our work made a difference.

As we look ahead to Election Day, we know November will be consequential for abortion access, our climate, health, and democracy—life and death issues for Minnesotans and people across the country. We are ready to make our voices heard and to call out the political garbage we are already hearing from candidates who want to be our next state officers.

While we organize for the future we deserve, we will not be quiet about a gubernatorial candidate comparing public health measures to Nazi Germany, a Secretary of State candidate pushing the Big Lie, or a hedge fund lawyer claiming to care about the public interest.

Together, we have the power to make a difference not only in this election cycle but in our democracy. And the metaphorical gloves are coming off.

In the field, we continue our vision of long-term organizing and building of a progressive voter bloc, having deep canvass conversations with thousands of voters across the state about their stories and our shared values. (See Everyone Should Learn How to Deep Canvass; Here’s Why by Charlie Bartlett).

We can feel in our conversations with Minnesotans that our approach is working. We are reaching our community members right where they are and building a stronger electorate along with them. We see this verified and affirmed in election results and in our data in the weeks following.

Our team of Movement Politics Deep Canvass leaders are proud and joyful.

But we aren’t big enough yet. We can see our conversations working, but winning requires scaling that work across the state. Primary elections have MUCH smaller turnout numbers than generals. We expect over half a million voters will turn out in Hennepin County alone. That’s a lot of people to reach, persuade, and inspire. If we’re going to reach the voters we need to create the change we deserve, we need more people having these conversations. We need YOU.

Join us. Sign up now to join our movement politics deep canvas on Wednesdays from 5:30-8:30 p.m.